When making decisions for ourselves, there is no moral problem with trading off suffering for pleasure or meaning; it appears to be a social fact that people do not minimize suffering in their own lives. This is an element of thought important in creating new human beings — when we have children we are effectively asking these beings who had no say about coming into existence to participate in this exchange of misery for meaning, and Perry questions whether or not we have the right to do this. This question also comes up for me when a person is no longer possessing higher consciousness.

We imbue suffering with meaning because of our higher consciousness and self-awareness but how moral is it to ask a person stripped of any sort of sentience to continue to suffer when such a personal exchange is no longer possible? Well, we tell ourselves that life is sacred and we cannot deprive anyone of life, no matter how little they experience life or how quickly they know they will be facing the end of their natural life.

Life has assumed the role of an ultimate good and because we cannot inflict suffering on others we cannot help them achieve a pleasant death, even if refusing that death is itself the infliction of suffering. All of this has led us to a very sorry end. What do we do when we know suffering no longer has any experience-value for the person suffering? For close to fifteen years my mother had suffered and the last year of her life was spent in complete misery as her conditions became terminal.

She had many things going wrong with her body, all of them painful, all of them complex. But of all the things we thought would kill her, a brain hemorrhage was not on the list. 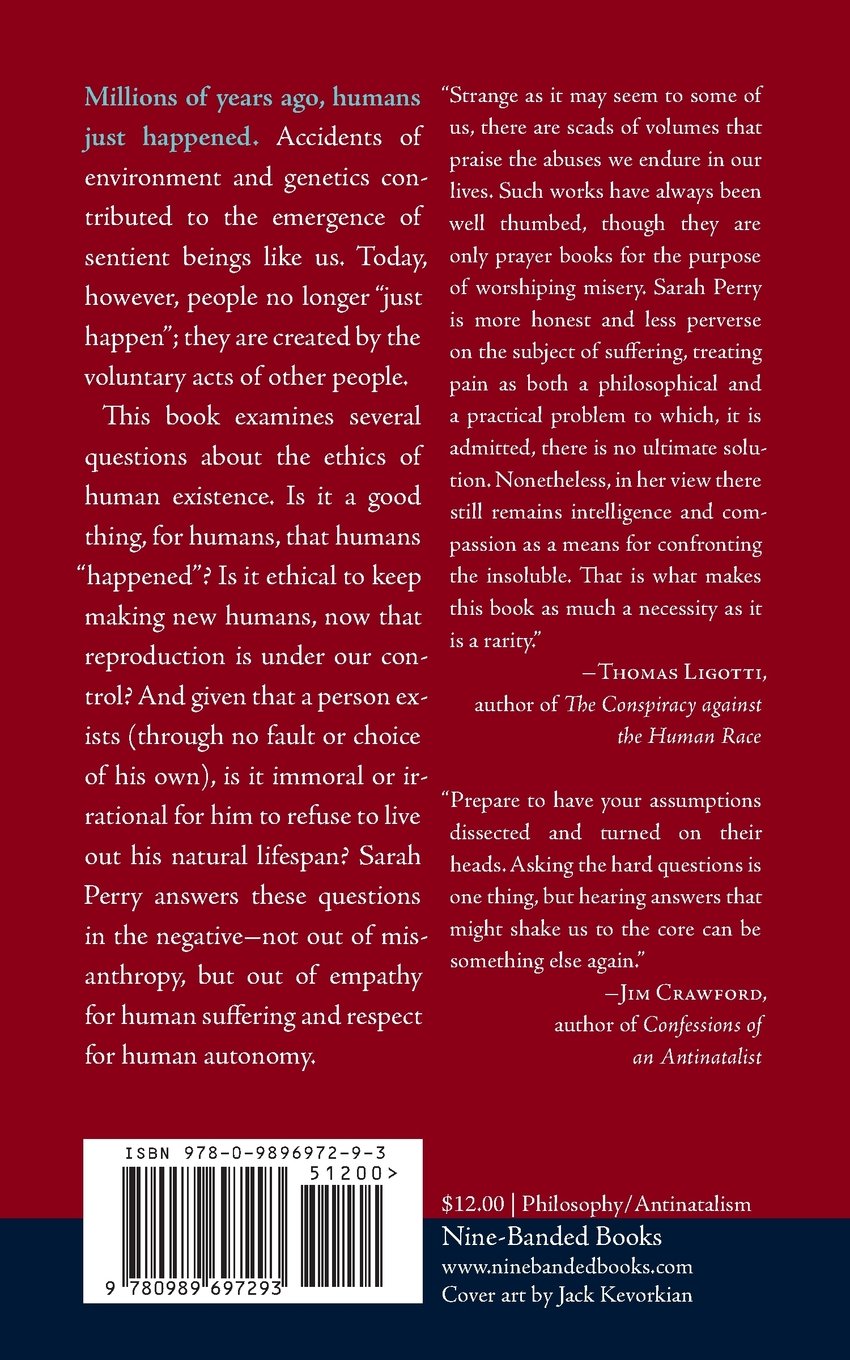 It was not until late the following morning on January 2, that a scan showed she had suffered complete death of her cerebral cortex and her cerebellum. Had the doctors detected the bleed the moment it happened there would have been nothing they could have done — her blood was unable to clot so surgery was not an option. We just had to wait for her to die on her own as the swelling in her brain reached her brain stem. They eventually put her in a room on the sixth floor and the vigil began. She also was given an anti-inflammatory drug that would help slow the swelling in her brain.

We were waiting for the swelling to reach her brain stem so she could finally die. Why did they give her anti-inflammatory drugs via IV?

About | The View from Hell

That inexplicable action prevented her brain stem from herniating and she could potentially have stayed in a coma for years. However, my mother had refused a feeding tube before the hemorrhage, so even though her heart kept pumping and her lungs kept breathing unassisted, eventually death would come in the form of dehydration and starvation. I came into the hospital room one day to see her husband asking her to squeeze his hand if she was okay with elements of her funeral planning.

I know now that people who are dying who seem unresponsive often can hear everything around them, but my mother was not temporarily unresponsive while dying. She had suffered complete death of all higher brain function. If they are telling us to talk to her, then they need to give her plenty of morphine.

Otherwise I was sitting in a dark, fetid room watching what was left of my mother refuse to die. But I also needed to believe she lost all higher brain function and could sense nothing because otherwise I stood by and did nothing as my mother was starved to death, as she felt pain and fear. Besides, my mother was taking up a valuable bed, one of the two pieces of shit masquerading as social workers told us. She was taking too long to die and they needed the bed and they said this at the foot of that bed while my mother was still in it.

Finally my mother did make it to hospice on January 9. She was taken care of by an excellent end-of-life staff. They noticed my mother was making facial expressions as though she was experiencing pain so they gave her morphine. She died not long after her second bag on the 10th.


I know deep in my heart what happened — the morphine depressed her nervous system so that her body could die along with her brain. She had had no fluids outside of IV-bags of meds, she had received no food for nine days and the morphine helped end it. But the hospice could not say this. She has been gone for over a week — the woman you loved is no longer in this body.

Let's Draw Every Cradle is a Grave (Sarah Perry)

This is killing all of you. This has to stop, so we are going to give her morphine until she dies. And no matter how much I know that my mother was gone, really gone from her world of pain and misery as of January 2, I am still afraid she suffered. That she was in pain. That she felt, heard, smelled and experienced every goddamned minute of it. Why is it death is so feared that even the most hardened atheist and humanist slips into magical thinking when faced with it.

Even Christians who believe in the celestial kingdom of eternal life after death mindlessly fight against the mechanism that sends them to their Lord. We see death as worse than suffering, and we give our suffering human attributes of spunk, of strength, of sanctity, because we are too chickenshit to face the reality that sometimes death is better than life. And since we are too afraid to face death, how the hell can we speak openly and honestly about how suicide can so often be better than continuing to live.

Sarah Perry was unspeakably brave to write this book. I had little patience for any of it because I could not justify the suffering my mother may have endured and that we, her family and friends, endured. We let her go and we let her go quickly and we do what is needed to help her leave. People have told me that I learned something from this, that I am stronger for having endured it. The only thing I walked away from that experience knowing is that if I ever become that ill, I will not wait for the inevitable end. I will not ask anyone to grow from the experience of watching me die.

I am focusing so much on the suicide part of this book because aside from some maternal rumblings when I graduated from college, I never really wanted a baby.

Read Every Cradle Is A Grave: Rethinking The Ethics Of Birth And Suicide

I thought about foster care a few times and even that seemed a bad idea. I suffer from cyclical but major depressive episodes and there was no way then and no way now to justify putting a child through it. Suicide and death are what I know. Babies and regeneration are not a part of my world.

Because I am a depressive, I seem to know all too well the burdens of being alive but I also know the burden that my own suicide attempt had on those who love me. Our ties to others often makes suicide difficult, if not impossible, even for those with a strong will to die. A great deal of the cost of committing suicide faced by a person wanting to die is social and empathetic: it is resonant in the loneliness and grief that his death will cause, or at least hasten, among parents, children, siblings, a spouse, or friends.

As social creatures, we begin forming bonds at least as soon as we are born; these bonds, while often no more voluntarily chosen than our own births, are powerful motivations.

The suicide of a close associate is usually regarded as much more than the event of such a person moving across the country and losing touch, even though the deprivation is similar in either case. Some social costs are artifacts of the prohibition. The suicide must act in secret, sneaking and hiding to avoid detection and unwanted rescue.

But who will discover his dead body? It will be especially traumatic for a relative or close friend to happen upon the dead body of a suicide. But for me the most interesting prohibition for those seeking death that Perry discusses is the threat of intervention before death and its repercussions. If you survive a violent attempt at suicide, you will be left in a wrecked body with even less quality of life than you had before you attempted suicide.


Only a man who has never heard the song could so effectively mangle the tune. After reading this book, I went back and reread sections of my old blog wherein I discussed the before and after of my own suicide attempt. I went psychotic due to really inappropriately prescribed pharmacology and ended up in a mental ward on Halloween of It was bizarre reading those entries because even though I can barely remember much of that time, I also know that what I wrote in my blog were hardly the words of someone completely in the throes of psychosis.

I asked Mr Oddbooks about it and he explained that there were long stretches in late September and October when I was completely lucid. Then a light would switch off and I would become incoherent and violent. But as I read my account of the hospital, I was struck by how distant I was in my recounting of it. It was horrible. It was far worse than the suicide attempt on both of us, my husband and me.

I was completely deprived of will and so was he.